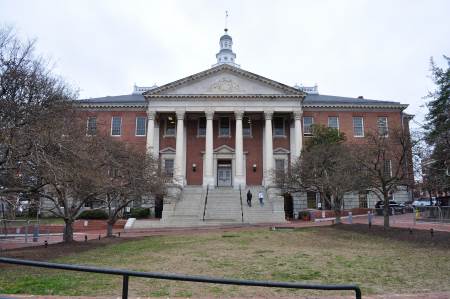 Annapolis was such a cute little town! I totally wish I had more time to roam around and see more of it. I mainly came here to check out the capitol. From the outside the capitol looked nice and inside it looked quaint. It was fun to walk around, but they didn't offer tours so it was done fairly quickly. The dome didn't have lights coming through it which were different from most other capitols, but instead was painted white. The halls were also dead silent; it felt like a library. Also, I swear the police guards were playing good cop, bad cop... When I went to go get my stamp for my capitol stamp book I went to the receptionist which pointed me to a guard booth. When I went there he was overly rude and insisted that he didn't have the stamp, that he's never even heard of a stamp, and there would be no way it was with him. Even though I asked him to double check he insisted so I left. Don't want to piss off the cops! The receptionists then said to try the upstairs cop. I went to the upstairs guard and he said that it should be downstairs. #facepalm Felt like running around in circles! I told him the downstairs cop insisted it wasn't down there so he radioed into the downstairs guard to tell him where to find the stamp. I went downstairs and low and behold the guard found the stamp! Seemed like the downstairs guard was not having a good day in the slightest, so I tried to be nice, got the stamp, and promptly left. And then I quickly hightailed it out of town.