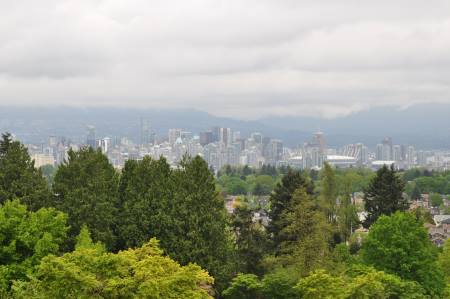 Vancouver is one of my best friends' favorite city of all time. I ended up staying at the hostel at Jericho Beach which was kinda phenomenal. The front desk guy was uber attractive and I spent countless hours flirting with him. Sure he was straight and had a girlfriend, but that doesn't mean I can't fill up my eye candy threshold! Vancouver wasn't the most pretty city, but it had a lot of fun components to it. Kitsilano was where all the cool stuff was apparently. It was fun to just walk up and down the street there and see what stores were around. Cambie street was also a pretty fun place to walk around. My favorite part of the city though was Queen Elizabeth park. This park was so gorgeous! I could only imagine how amazing it would be to be there during the summer and just relax all day. I'd probably get almost no work done!

Vancouver was super fun and I'll likely go back one day. The only problem with the city was the architecture! You would think a major city would have good architecture, but it was some of the worst I had ever seen. Apparently they are building new buildings that will be more gorgeous, but until that time I'll sit and wait I guess.